It is required in the U.S. for every individual or family to file an income tax return every year, regardless of whether you have tax withholding or had payroll adjustment. 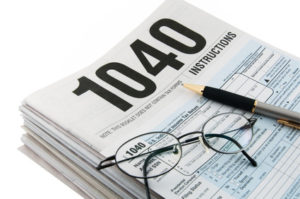 Tax returns are categorized as follows:

Tax return is filed to the Internal Revenue Service.  In addition to Form 1040 or 1040NR, additional forms and schedules need to be attached.

Tax return is filed to each State’s Taxing Authority.  States, such as Texas, Washington, and Florida to name a few, do not have individual income tax, and therefore would have no state income tax return filing requirement.

Local tax return filing is not necessary in most local tax jurisdictions.  However, municipalities in Ohio, and a part of Michigan, for example, do require its own local return filing. Some local taxes, such as New York City tax and Indiana local tax, are included in state tax return.

Report of Foreign Bank and Financial Accounts (FBAR: FinCEN Form 114, f.k.a. TDF 90-22.1) needs to be filed to the U.S. Treasury Department if you have financial accounts outside of the U.S. that have bank balance exceeding certain threshold.  This report is not a tax return but a disclosure form, so it is not relevant to the tax return filed to the IRS.

Furthermore, a tax return filed to the IRS includes Form 8938 (Statement of Foreign Assets), which is similar to FBAR in terms of disclosure contents; however, both FBAR and Form 8938 need to be filed if certain conditions are met.  This is true due to filing requirements for FBAR and Form 8938 being different.

A tax return may be filed as married-filing-joint basis, but FBAR needs to be filed separately by each spouse unless all their foreign accounts are jointly owned.

There are 3 positions to file a U.S. Federal tax return:

This filing position is mandatory for full-year U.S. residents, including U.S. citizens and U.S. Greencard holders.  Under this filing position, world-wide income is taxable, so everything should be reported.  If married, a married-filing-joint return or married-filing-separate return may be selected (generally, joint filing is more beneficial).  As a full-year U.S. Resident, Form 1040 will be used for filing.

If the number of days stayed in the U.S. is less than a threshold, this filing position becomes an option provided that the individual is not a U.S. citizen or does not possess a U.S. Greencard.  A different filing position may be elected if applicable and more advantageous.

(*) U.S. source income refers to income earned in the U.S., and not income paid in the U.S.  Location of payment, payer, and payment method is irrelevant.  If a Japanese employee, for example, expatriates to the U.S. or goes for a short-term business trip, salary and wages paid for those U.S. work days are deemed as U.S. source income even if it is paid out of Japan.  This is true, because salary and wages were paid out for services rendered in the U.S.

If the U.S. residency commences or ends during the tax year, this filing position becomes an option provided that the number of days stayed in the U.S. is more than a threshold.  Part-Year Residents will be treated as residents for part of the year and non-residents for the remainder.   As for the tax return, it will consist of Forms 1040 and 1040NR being combined.  A full-year Resident position may be elected if applicable and more advantageous.